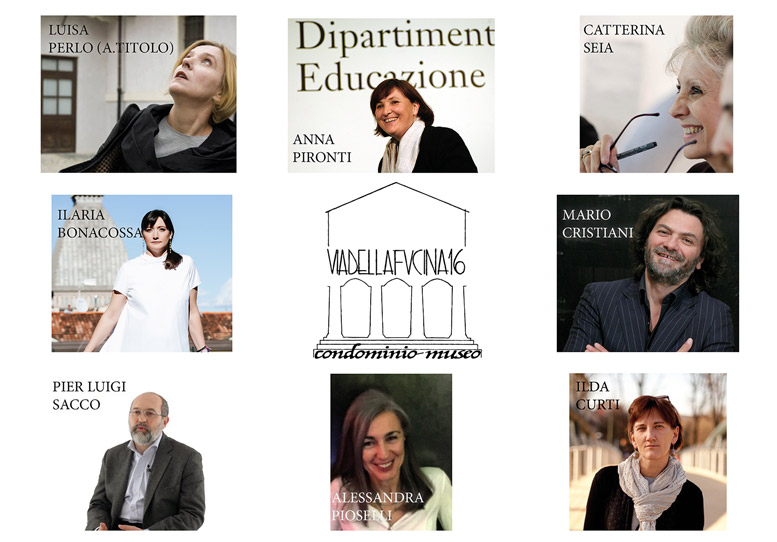 are the 8 members of the Scientific Committee for viadellafucina16 condominium-museum.

Kaninchen-Haus is proud to host a committee of great prestige, which will oversee the whole project, including the numerous spin-off that will be announced progressively, during the next months.

The first task assigned to the committee is the listing of the 44 applications, chosen among over 440 others received from all over the world, according to the following criteria: artistic curriculum; quality of the portfolio; quality of the project; ability to affect the community. The last word on the winners is up to the inhabitants of the first condominium-museum.

To this end, on Saturday 5th of August, at 6 pm
in the entrance-hall of the condominium-museum viadellafucina16
(Via La Salle 16, Turin: map)
it will open to the public the exhibition
“44 ideas for viadellafucina16”
that will present a synthesis of the best 44 proposals from the category artists under 35. Here we will collect all inhabitants’ opinions.

We are also glad to announce that Sikkens Italia – Akzo Nobel, a global leader in the paint field, is contributing to the project, within the Human Cities initiative, by donating the material to re-paint the entrance-hall of the building, as well for the artist’s works. Kaninchenhaus and viadellafucina16 thank for this great example of enterprise responsibility, hoping for more collaborations of this kind with other excellent businesses.

viadellafucina16 is a project by Kaninchen-Haus. From an idea of Brice Coniglio
with the support of SIAE e MiBACT  within “Sillumina – Copia privata per i giovani e la cultura”
and Programma Housing di Compagnia di San Paolo, within the project “Abitare una casa, vivere un luogo”. W

a.titolo is a non-profit organization established in 2001 by the homonymous collective of curators, critics, and art historians. It was founded in Turin, in 1997, by Giorgina Bertolino, Francesca Comisso, Nicoletta Leonardi, Lisa Parola and Luisa Perlo, with the aim of investigating and promoting the relation between art, the public sphere, and society. a.titolo curates and produces public art and context-specific projects, exhibitions, workshops, documentaries and educational programs, developing an interdisciplinary dialogue between  visual art and urban design. a.titolo is representing Italy in the New Patrons program ( Nouveaux Commanditaires ), promoted by the Foundation de France, aiming at creating works of art that are commissioned directly by the citizens for the places in which they live and work.

Ilaria Bonacossa is Director of Artissima International Fair of Contemporary Art in Torino. With a degree in Contemporary Art History from the State University of Milano. After taking a master in curatorial studies at Bard College (USA), she worked in New York at the Whitney Museum. After 7 years as curator at the Fondazione Sandretto Re Rebaudengo in Turin, from 2012 to 2017, she was Artistic Director of Museo Villa Croce, Genova. In 2013 she curated the project of Katrin Sigurdardottir at the Iceland Pavilion of the Venice Biennale. She has been a member of the Technical Committee for acquisitions of FRAC Provence-AlpesCôte d’Azur in Marseille, of the Steering Committee of PAC in Milano, and director for Italy of the Artist Pension Trust international program. In 2007 she was a member of the Jury for the Leone d’Oro of the 52nd Venice Art Biennale, and in 2013 of the Jury for the Inamori Foundation Prize in Kyoto. With Art@Work she develops projects in non-profit contexts and for private collections.

Mario Cristiani Mario Cristiani (Calitri, Italy, 1964). He studied Political Scienze at Università di Firenze. In 1990, he founded, together with his two friends Lorenzo Fiaschi and Maurizio Rigillo, Galleria Continua and, in parallel, Associazione Arte Continua, becoming its president. With Associazione Arte Continua, Critstiani coordinated the ten editions of the show Arte all’Arte. Arte Architettura Paesaggio, which has involved international curators and artists into the realization of site-specific projects in the Siena’s Province; while, for the project Rinascimento Nascimento. Arte Energia Sostenibilità, he worked in places such Vinci and Scandicci. Since 2003, Associazione Arte Continua is the promoter of the « ArtexVino=Acqua» campaign that makes of contemporary art and good wine a vehicle for international charity by contributing in the realization of water plants in the most disadvantaged areas of the world. In 2005, Galleria Continua opens a new space in Beijing, the first gallery in China to present an international program. In 2007, together with his two friends and colleagues, Cristiani inaugurates Le Moulin, a singular space for artistic creation in the Parisian countryside. In 2009, Mario Cristiani becomes president of the Scientific Committee for the project of local development  Arte Pollino un altro sud , part of the Sensi Contemporanei program, promoted by Regione Basilicata, the Ministry of Economic Development and the Ministry for Cultural Goods and Activities. The aim of such project is to enhance the environmental and cultural heritage of Parco Nazionale del Pollino’s territory through international contemporary art. Here, Associazione Arte Continua presented works by artists such as Anish Kapoor, Carsten Holler, and Giuseppe Penone.

Ilda Curti has more than 20 years of experience in researching, teaching and planning  local development, urban regeneration policies and Europlanning, with specific expertise in social inclusion, migration studies and cultural development  She was involved for 10 years in Local Administration as Deputy Mayor in the City of Turin, in charge of integration and urban regeneration policies, youth and gender equality policies, urban design, and public property policies and community programs. From 2011 to 2013, she was also in charge of Town Planning and private housing. She collaborates with the platforms Gli Stati Generali and Che Fare. She became Knight of the French Republic in 2010, in relation to her work integration policies and urban regeneration.

Alessandra Pioselli is the director of Bergamo’s Accademia di Belle Arti G. Carrara since 2010. She teaches Contemporary Art Hisotry a the same Academy and Public Art at the Ecomony and Management Master Sole24Ore (Milan). Moreover, she is an art critic, curator and freelance journalist. She collaborates with Artforum (New York). In 2015 she published “L’arte nello spazio urbano. L’esperienza italiana dal 1968 a oggi” (Art in the urban space. The Italian experience since 1968 until today), Johan&Levi (Monza).

Anna Pironti is head of the Education Department at the Castello di Rivoli Museo d’Arte Contemporanea since 1984. She has been planning and promoting its various activities for the public, aiming to share knowledge on contemporary art, inside and outside the Museum. She directs and coordinates the work of the Education Department team, which in 2011 was given a price for school employees’ training by the Italian Ministry of Education. Since many years she has been working in the field of higher education with universities, academies, and companies receiving international recognition and prizes. In 2012-2013, she coordinated the educational shared project with the Musée du Louvre DPPEA, relatively to Michelangelo Pistoletto’s exhibition “Année un. Le Paradis sur terre” at the Louvre. In 2016-17 the Education Department of Castello di Rivoli was invited (the only Italian museum) by the Independent Schools Victoria to participate in the Arts Learning Festival in Melbourne and its projects were included in the research conducted into festivals around the world, by Project Zero from the Graduate School of Education at Harvard University. Among the recent international collaboration, in 2017 she participated to the Greenwich and Docklands International Festival with Stalker Teatro and she has been invited to establish a new partnership with e-Luminate Cambridge Festival 2018.

Pier Luigi Sacco (PhD, European University Institute) is Special Advisor of the European Commissioner for Education and Culture, Professor of Cultural Economics and Deputy Rector for International Relations and Research Networks at IULM University, in Milan, Senior Researcher at the MetaLAB (at) Harvard and Visiting Scholar at the Harvard University. He is a member of the Advisory Committee of European Foundation, of the International Board for Research and Innovation of the Czech Republic, of the international advisory board of Creative Georgia and of the Commission for Cultural Economics and Museums of the Italian Ministry of Culture. He lectures and consults worldwide and has a vast international experience in cultural policy design and local development strategies. He has been a speaker for the European Commission (DG Culture and Education, DG Connect), UNESCO, the Council of Europe, and in the cultural policy conferences and workshops of the Lithuanian, Greek, Italian, Latvian, Dutch and Estonian Semesters of Presidency of the European Union. He writes for Il Sole 24 Ore, Domus, Il Giornale delle Fondazioni, Flash Art, Artribune.

Catterina Seia is head of Giornale delle Fondazioni that she initiated and is the vice-president of Fondazione FitzCarraldo. Her career in finance has ranged to the Central Director of the Learning Center and Strategic Communication for Banca CRT and UniCredit Private Banking. In 2003 she conceived and initiated the UniCredit & Art project for strategic management of international cultural investments and the Group’s collection in 22 countries – with a strong focus on corporate culture, CSR and creative talents -. It was among the first programs in Italy to change sponsoring policies into partnerships with cultural institutions for national development projects. Since 2010, she has chosen to invest the experience and competence she gained in social innovation, advocating a strategic role of culture towards a new welfare, including Community Planned projects involved in aspects of rebirth and empowerment of schools, hospitals, cooperative housing and existential peripheries. This path brought her to the Fondazione FitzCarraldo, a research body focused on cultural policies, and to co-found Medicina a Misura di Donna Onlus for the humanization of treatment and treatment centers, in which she created an unprecedented platform for research-action on the virtuous relationship between Culture and Health. Since 2010 she has been collaborating with Giornale dell’Arte, handling the Annual Reports and the related web pages of Fondazioni and Arte-Impresa.